Can reading the Japanese versions of manga comics be good for language learners and students alike? We explore methods and useful textbooks for further study. 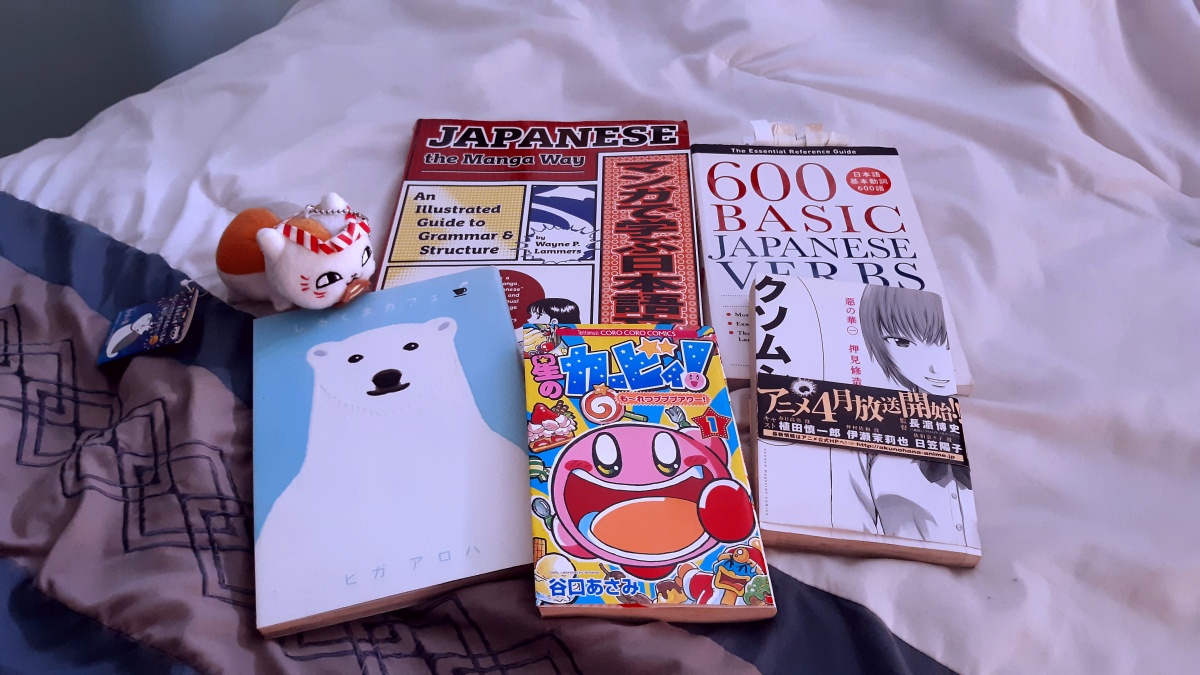 Whether you’ve been neglecting your studies or have yet begun, this is a post for anyone who would like to study and improve their Japanese using manga.

This post takes into account that you have already taken formal classes while learning grammatical rules, the three Japanese writing systems of hiragana, katakana and kanji, and have the ability to formulate basic sentences.

These are the basic requirements to read simple manga, comics, and understand Japanese vocabulary.

Today we are taking a look at five books.

This includes Japanese comic books (colloquially referred to as ‘manga’) and language textbooks that can help improve your Japanese reading ability.

Although it may seem overwhelming at first, I’ll show you how reading an entire manga book while cross-referencing vocabulary and particular kanji characters from textbooks can help you become fluent in this foreign language.

In one of my first posts on In Asian Spaces, I talked about religiously reading a manga after finishing an anime series I enjoyed. Or vice-versa.

Using the Aku no Hana Manga to Study Japanese

One of my absolute all-time favorite manga series is Aku no Hana [惡の華], or The Flowers of Evil by Oshimi Shuuzo.

The work explores themes of deviance, isolation and mental illness surrounding a remote mountainous town in Japan. The characters would all eventually like to “go beyond the mountain” and escape the monotonous daily life of being surrounded by judgmental, close-minded individuals.

I first read the manga while it was still ongoing in 2009 – 2014 and then watched the (unjustly poorly rated) rotoscoped anime adaption in 2013.

In current news, there appears to be a live-action film in the works scheduled to premiere this fall that I’ll eventually have to watch.

Anyway, I go to my local Kinokuniya to purchase the manga in Japanese for a re-read with the show fresh in my mind. I’ve found that it’s easier that way since if you do stumble upon an unknown kanji, the context of the situation is still comprehensible.

Luckily, Aku no Hana uses furigana, or kana by kanji to indicate pronunciation.

This is the first book we’ll examine.

The primary focus in this work is Kasuga Takao and Nakamura Sawa, both middle school students. Because of this, a high usage of informal, childish speech kids use can be found coupled with advanced words related to school coursework and studies.

When reading a chapter, I like to circle a word, or particular kanji characters in pencil that I do not understand.

I continue on, but then come back after finishing to see if it makes sense. If I am still stuck, there are two options: either ignore it and keep going, or look the word up using a service.

Luckily in the digital age it is fairly simple to open the google translate app and snap a picture to find out what the word means. You could then input the word into an online dictionary such as Jisho and discern its meaning, see it used within a sentence and even learn the stroke order to practice writing.

Using a spaced repetition method, write the word down at least five times while saying it aloud along with its meaning. A sheet of notebook paper would be fine for this, but if you’d like to get fancy and are serious about your studies look for something called “Kanji Practice Sheets”.

These are used in classroom settings to learn the writing systems or for personal study use.

Googling this phrase, you can find PDFs to download for free or you can even make your own. Simply go to the dollar store and purchase unlined paper, a ruler and bam – you have practice sheets! Or if large graph paper booklets are available in an office supply store near your home, that would be even better.

I don’t know what it is, but I just find the official practice sheets for sale often have inflated prices way beyond their usefulness. But, that’s just me.

One more option for learning kanji and building vocabulary would be investing in a study aid. I purchased 600 Basic Japanese Verbs almost two years ago in anticipation of the December JLPT. I am a terrible test taker, and since I learned Mandarin before studying Japanese I have a tendency to mix up the meaning of kanji characters.

This book is really useful for learning all forms of a verb to truly grasp its usage in written and spoken common speech.

You’re probably wondering where the other books come in, right?

In the photo, Saeki-san’s friend asks:

“Hey Nanako – did you hear? Did you hear what happened?”

“Huh?” or “No, not yet” could be her interpreted response.

Japanese the Manga Way is great at filling in the gaps that come with the nuances of Japanese culture such as the honorific/hierarchy system from the perspective of an informed outsider.

This book highlights and focuses on patterns of informal speech that would be used by say, our middle school characters in The Flowers of Evil.

Japanese the Manga Way also explains situational differences and gives examples of when informal usage would be acceptable, or solutions of polite speech to use instead with detailed illustrations of differing scenarios.

Speak like a local with the Shirokuma Cafe Manga Series

This book acts as a great aid for manga that heavily uses katakana, or the Japanese syllabary primarily associated with foreign words.

The story follows a group of talking animals in a world that co-exists peacefully with humans. After watching the 2012 anime adaptation, it was great to revisit the world and learn the corresponding characters for Japanese homonyms and homophones.

It also helps that the characters are simply names of animals, so if you ever go to a Japanese zoo you’d be a wizard traversing the different habitats!

The last manga to mention is Kirby.

I’ve never really played the games or seen the anime, but this was recommended to me when I first started reading J-manga. I’ll be honest: all I know about the story is that a pink blobby creature has the power to inhale anything, and eats a lot of food.

(Kirby would also be the last survivor should an apocalypse ever happen, as evidenced by the last Super Smash Bros game storyline.)

The manga is written to be a simple read, and utilizes all of the writing systems referenced above while having a fun, silly story with nice pictures.

It’s a stress-free read if you are just beginning your Japanese language journey.

So using these methods – should we call it the In Asian Spaces method? lol- you now know how to:

look up a new kanji character

determine its contextual meaning based on conversational subjects

recognize all of the forms verbs can take during conjugation

If anybody is interested, I can make a post on textbooks and supplementary material recommended for beginners at a later date.

Just let me know in the comment section if you would be interested in that. Also, tell me:

How do you learn Japanese?

Do you believe reading manga can be good for learning Japanese?

What have you found to be the best manga to buy for learning Japanese as a beginner?

Do you have any recommendations to add to the list?

Leave your thoughts in the comment section below, I’d love to hear from you! Also be sure to follow us for more language learning strategies using anime and manga!

30 thoughts on “Learning Japanese through Manga”