A new installment in the NEET in Manga series! This time we’ll take a look at Boku wa Mari no Naka character Mari Yoshizaki.

A NEET could be defined as a young person between the ages of 15-29 who is Not in Education, Employment or Training. The age range can go as high as the mid-thirties in some studies. Social anxiety, lack of ambition, depression, and exhaustion are all conditions which could factor into one’s decision to choose the ‘NEET lifestyle’. Sometimes these individuals hold a part-time employment status for income (with the intention to save up before quitting), but often times they are supported by relatives or immediate family members.

Family members support the individual in question out of shame and/or guilt perceived as a failure on their own part. Due to negative connotations and stigma surrounding mental health in Japan, many families would rather “enable” the situation than seek help – which could translate to judgment from outside society. Women are more likely to become NEETS than men, as men are more likely to become hikikomori, or shut-ins.

In recent years, the Japanese government has made strides toward combating this epidemic. Regional Youth Support Stations, New Start’s Rental Sisters and Brothers, as well as Agricultural Initiatives targeting NEETs seem to be trying to change the tide. The inclusion of many individuals suffering this disorder in manga and anime is something I would like to catalog here at In Asian Spaces. If you can think of any characters that may fit these profiles, please leave their names or the series in the comment section below.

Be sure to check out our previous character profile log on Tokyo Ghoul’s Saiko Yonebayashi. 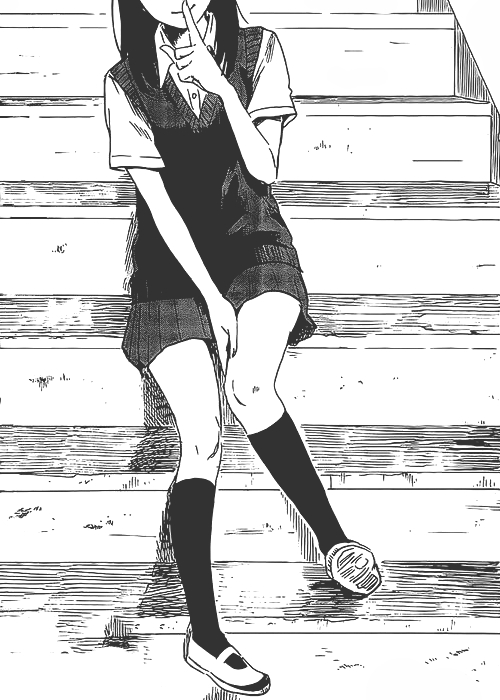 Description: An “angel-like” beauty with long dark brown hair, wide eyes and a slim figure. She is very popular in high school and has reputedly turned down every male who has asked her out.

Details of Note: Some of you may be confused as to why I’ve listed Mari as NEET rather than hikikomori. Mari chooses to escape her life by believing she has switched bodies with an actual shut-in, Isao Komori.

She stalks the college dropout and tries to emulate his behaviors. However, in reality, she misses school, is given prescription pills by her mother, and frequently goes out on ‘missions’ with friend and somewhat lover Yori. The two girls seem to have an intimate relationship implied in flashbacks to be initiated by Mari one day in the nurse’s office at school. Other indicators of Mari’s sexuality may reside in her hobby of buying female erotica during her nightly walks away from home (evidenced in Isao’s true memories).

Since she is a minor, she is supported by her family monetarily. The character also chooses not to attend school (although mainly it is due to incapacitation) and still socializes a bit. We can contrast this to Isao, who has absolutely no contact with other human beings throughout his day except late at night when he goes for snack runs at the local convenience store.

When offered video games by her younger brother, Mari declines and would rather avoid family members. Despite this, her brother remains a solid support system as her parents seem to ignore and trivialize her illness. They want to make it “go away” with pills so that it does not inconvenience their daily lives or ruin her ‘perfect’ image at school. There is also the whole “Fumiko” thing and some sort of memory-induced dissociation….

Mangaka Oshimi Shuuzo often writes about mental illness, these being heavy themes in prior works such as Aku no Hana and the ongoing Happiness. There are also strong themes of societal deviance and isolation in the central core characters, which we will cover in later posts…