I at least take comfort in the fact that I am not the only one confused. 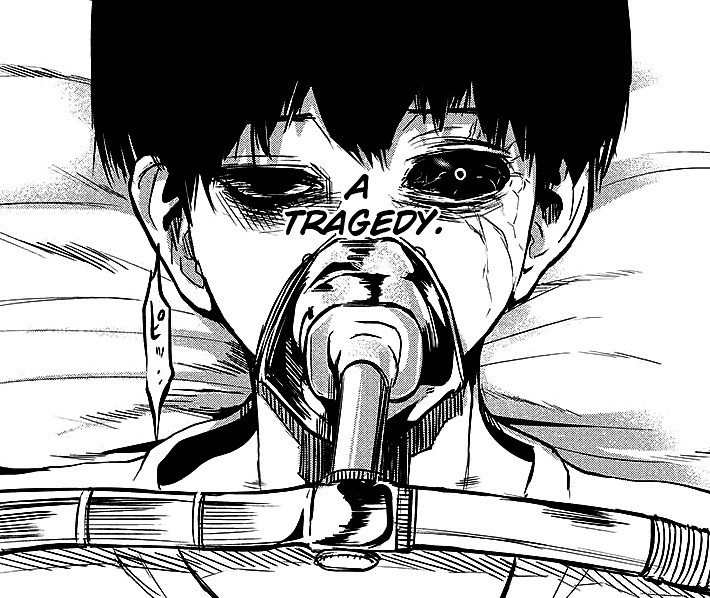 Tokyo Ghoul, or Tokyo Kushu:re [東京喰種トーキョーグール：re] is an ongoing anime series that originally began airing in the summer of 2014. It is based on the popular manga by Sui Ishida that produced both TG and it’s continuation, :re.  I initially read a few chapters of the original story, but have yet to finish due to the personal preference of waiting until the anime ends to read and compare the key differences in an adaptation.

The first season adaption of the series remained consistent according to a general fandom consensus. Season two, however, veered off from this severely. The most memorable scene for me will always be Kaneki serving Jason (Yamori) some overdue justice while “Unravel” by TK from Ling Toshite Sigure played in the background.

Tokyo Ghoul √A [東京喰種√A] seemed to have Kaneki Ken join Aogiri Tree, the organization that had kidnapped and tortured him. In the manga, he sided with the Anti-Aogiri group that was set on escaping their imprisonment by the shady group. The underlying basis in this is that Kaneki wanted to protect his friends, while in the anime he did not.

As a non-manga reader, I fully understood this season and even though finding it a bit dull, overall thought it was okay. “Glassy Sky” by Yamada Yutaka (やまだ豊) was an amazing song to listen to during certain scenes. I also really enjoyed the OP, or opening song for that season, even if I am seemingly alone in this. Say what you will about the series, but at least the OST, or official soundtrack is solid.

I caught the first cour of Tokyo Ghoul:re over the spring when it aired. I enjoyed it but was utterly confused with what I was seeing on screen. I had heard from manga readers that season two had pretty much veered off story wise and :re was supposed to essentially retcon it.

As with many things, I am very liberal with spoilers. You could “spoil” a show completely for me down to the last detail, and I would still be able to enjoy it. Sometimes with stories that have been ongoing for a considerable amount of time (ex: Naruto series, Shingeki no Kyojin, etc.) I’ll just look up certain things. Or if an extremely good episode was left on a cliffhanger, I will immediately resort to the manga before the next. I like to think of this practice in my head as ‘situational spoilers’. Plot details I normally would wait for, but just can’t seem to actually want to delay that knowledge.

After patiently sitting through the first cour of :re anticipating Sasaki Haise’s revert back to Kaneki Ken, it all paid off in the final episode. As an anime only watcher, the entire season had consisted of pointless slice of life-esque arcs with members of the CCG. Coming from past seasons, I did not care for any of these people and the anime did nothing to really humanize the bunch. The aura of cold sociopathy still exuded from these people who worked in this sterile desolate white building. The constant hidden and blatant ambitions of social climbing and backstabbing was such a turn off, especially when Kaneki or rather – Haise – would go home to more disrespect and antagonism from his team.

It really pissed me off watching Kaneki’s amnesia and how he was unknowingly interacting and working for those he considered enemies. It could be argued that was the point, but constantly shoving the organization in my face each episode did not allow me to soften to them as one would have hoped to while trying to enjoy the anime.

I especially hated all of the time spent with Quinx Squad. Yonebayashi Saiko and Shirazu Ginshi seemed like decent people, but I absolutely could not stand Urie Kuki. I also could not care much for Mutsuki Tooru, given the spoilers I read about their character.

But I powered through it, because moments with the ghouls of Anteiku made it worthwhile. The moment Haise unwittingly was drawn to the café with his old friends who silently just watched him was truly heartbreaking.

I was even excited to see Tsukiyama Shuu, despite him being a creep in previous seasons.

Then the first episode of the season’s second cour premiered, and it all went out the window once more.

Who is this guy in all black wearing glasses? Is this the Black Reaper character personality people were hype about? Why is he obsessed with arresting Takatsuki Sensei? Okay, why did Yoshimura Eto reveal her secret at the book release? Why can’t most ghouls read books without hiragana? I remember Hinami was really smart, and Touka disguised her true nature to attend high school normally. Why is Kaneki still working for the CCG, didn’t he want to die? Okay, Eto called him Kaneki so that really is Kaneki. Oh, Kaneki is going to free Hinami? Wait, where did his glasses go? Were the glasses just an act?

All jokes aside, episode one was extremely confusing. At least the op was good. TK from Ling Tosite Sigure was singing it again, and given my affection for post-hardcore I couldn’t help but bop my head to it.

Reddit user Gary4067 made a bullet point list of all things skipped in the episode, and it’s pretty tragic. Apparently, it adapted at least nine chapters from the source material.

Coming off the first cour and referencing the wiki, we left off at the Tsukiyama Family Extermination Operation arc. We then are just thrown into the Third Cochlea Raid without (from a manga standpoint) understanding why Kaneki is randomly going rouge. Yes, he did want to die – but the anime showed us him still faithfully working for the CCG even if he did get a little saucy by throwing things during an interrogation. I have no clue what happened to Tsukiyama or the ghouls who came to rescue him during the last cour’s end. No clue why Ayato is also coincidentally trying to raid the Cochlea. Rize is supposedly dead in the series and a figment of Kaneki’s imagination but apparently, she’s alive being held somewhere against her will.  No clue why Eto revealed her true identity to the world. Don’t know why I should care about the causal connections between the Washu clan, Organization V or the CCG but I’m sure it’s something important.

Manga wise, apparently: Eto revealed her identity as the popular author and the One-Eyed Owl at an Aogori Tree meeting or something but was overheard, so decided to reveal it to the public.  Rushima Island was being raided by the CCG, so Ayato (kinda?) decided to ambush the Cochlea along with AT members. Kaneki’s memories of being held prisoner in the facility after his defeat by Arima were not touched upon. Some background on Rize’s childhood was also missing.

If this was confusing to read, it is because even with explanations and spoilers I am still a bit jumbled as to what is going on in the series.

Animators in Japan are notoriously overworked, and Studio Pierrot has a history of questionable quality when it comes to their shows. Certain episodes of Naruto Shippuden and The Legend of Korra come to mind.  There seems to be a new director in charge of this season who lots of fans don’t seem to have a lot of faith in.

I am not sure if the production team is channeling the mangaka’s urge to be finished with the series, but for whatever reason, they are rushing it to the point of complete incoherence. Maybe it is budgeting issues, maybe there is a lack of leadership – we as watchers will never really know the true issue unless an insider spills the beans. But whatever the problems are, I wish the pacing would slow down just a bit in order to make sense and properly introduce characters. When a key character to the manga plot is introduced but on screen watchers are not given nor shown context as to why they should care, they tend to lose interest. I did not give a single damn about the man who was possibly killed while trying to defend Rize. I say possibly because the fight’s conclusion was too vague to show us his fate. Almost as vague as to why he was introduced randomly in the first place.

Either the studio needed to order more episodes to explain certain plot points, or it should have been adapted and condensed more fairly. I just wish I knew why Tokyo Ghoul Re is really this bad. Actually, Re and Root A both seemed to be a complete mess in retrospect.

I will continue to watch because frankly, I seem to enjoy scraps at this point, but I will be sure to read the manga once this season ends. For those of you also interested in reading it, Tokyo Ghoul, Vol. 1

can be purchased legally using the link at no additional cost to yourself.

How do you feel about the series adaptation as a whole? Are you a manga reader, anime watcher only, or a mixture of both? Do you think the Tokyo Ghoul:re “Call to Exist” video game will be better than the entire tv show?

6 thoughts on “What is Going On with The Tokyo Ghoul: Re Anime?”