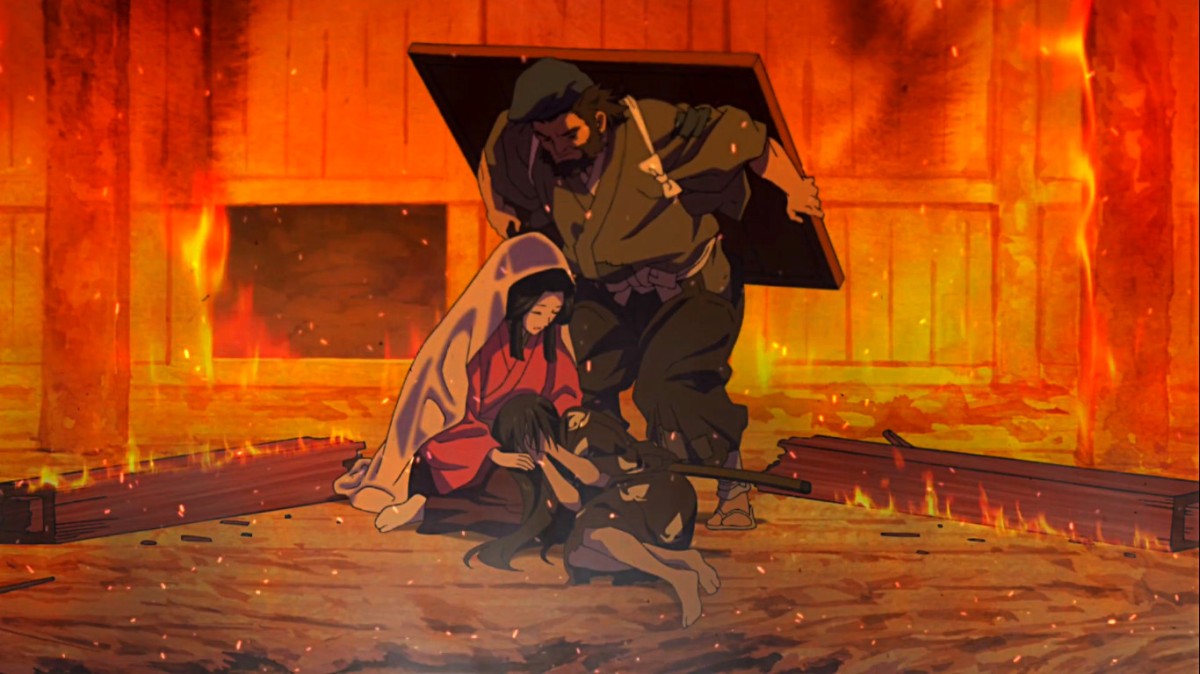 Need to catch up with the series? Use this link for a free 30 day Amazon Prime Video trial and watch the Dororo anime legally! Check out last week’s Episode 23 review here.

Let me start off by saying that I loved this episode, even if it could have been split into two. It wasn’t necessarily rushed, rather I felt like there was more story to tell. I’ve read that the actual manga series was left unfinished and open-ended, so I should be grateful at least for this decent ending.

The things fell in place as need be, but I have one gripe about the ending: Tahomaru.

It’s no secret that I absolutely loved his character. He was great! A young man who wanted to protect his community, connect with his family, and ultimately went to hell and back to do it. He lost his only friends and became something unrecognizable to himself. In the end, Tahomaru did the right thing and returned his brother’s eyes, not allowing the twelfth demon to control him.

But, did Shura happen to take something from him in exchange for the power of Hyakkimaru’s eyes? Tahomaru never really had his vision restored, but retained the same vision as Hyakkimaru – the ability to see the earth’s essence. He could see colors of souls and objects, blue for sanctified objects, red sprinkles denoting a brewing darkness. Interestingly enough, when Tahomaru spoke of things that affected him on a spiritual level, his demon-loaned eyes closed.

Maybe Shura, the God of Wrath, did not want to see or acknowledge the pain and suffering he had caused. Like Daigo, the entity was set on creating chaos – all the while convincing himself he were just.

Before Hyakkimaru attempted to deal the final blow, he saw a series of visions that convinced him to stop and take another path. At first, I thought Tahomaru was a goner and Hyogo and Mutsu’s spirits had returned to comfort him, and meet him to venture into the next realm. Then Hyakkimaru saw Dororo, his mother, Jukai, and even the headless Goddess of Mercy Kannon statue.

There was a second where a dark hole could be seen in Tahomaru’s chest, denoting that he had lost his heart. Before the fighting, he never had this – even while being possessed. So what changed? Was it fighting in the castle he grew up with? Watching it all burn down to the ground? Or was it the fact that everyone he loved was gone and he felt the weight of his mother’s emotional abandonment?

Was it because he realized that he was lacking, and his jealously of his older brother Hyakkimaru over their mother’s love?

With the realization later on in the episode that Lord Daigo never thought of his second born as anything but a pawn for his bidding (the whole “Tahomaru and I will come back as demons to haunt this land” throwaway line) must have hurt him deeply. Maybe Tahomaru wondered why he had even been born, and why he had tried so hard to be a perfect son when in the end – it amounted to nothing.

After Hyakkimaru stabs the literal crystal skull demon energy vortex thing that had been feeding off of the castle’s energy and in turn became its foundation, he receives his eyes. The wraps that bound his newly covered hands to his swords fly off, along with the blood he had held onto. His hair is also untied for the first time, symbolically releasing what was long pent up. A total rebirth.

Then there is Tahomaru, who had passed out from the ordeal and is essentially ignored until Hyakkimaru is safely away. Hyakkimaru never even glimpsed his brother’s face, despite continually slicing it up each time they fought. When Hyakki opens his eyes for the first time, he sees Oku, Jukai, and his brother’s life forces. Tahomaru’s life force was as strong as Oku’s. Jukai was the only one who seemed weaker.

There is a crack of fire similar to the lightening that happened when he was born into this world. The flames seem to swirl and take Hyakkimaru to safety, while leaving the other three to their fates.

I didn’t understand the equivalency.

Was this supposed to be an even sacrifice in exchange for Hyakkimaru’s new life? Oku (or Nui – I really have no idea what her actual name is in the adaptation) was judged for her involvement and complacency in the original deal with the demons. Jukai had fulfilled his atonement for the war crimes he committed years earlier. And then there was Tahomaru, who honestly seemed like an innocent in this situation who just happened to be born into some terrible shit.

I don’t understand why he had to die. Cultural differences aside, this show is heavily influenced by Buddhism and Shinto. To live is to be suffering, to desire is to suffer, and enlightenment can be attained by riding yourself of these things. It is much deeper than that, but for explanation sake let’s leave it at that.

Tahomaru has a visible reaction when he awakens and realizes that his mother will always be by his side. His eyes widen in fear, and then close once more in acceptance of his fate. Is there a reason he also had to die? Seriously, his dealings with the demons would come back to haunt or affect him in some unseen way, sure – but he was alive. He was not dying, and he did not want to die.

Why take him with you on a suicide pact he couldn’t consent to?

Yes, he did smile sadly at the very last moment but I interpret it as more of a comfort that he would not die alone. He promised his only friends, Mutsu and Hyogo, that he would save their lands. In her dying breath, Mutsu told him he would be a great leader.

It was all for nothing. I know sometimes it really is like that, but it doesn’t make me less upset about his fate. About any of their fates, in actuality.

The priest Biwamaru seemed like a complete wildcard towards the end. From admitting he was a samurai in passing, to expressing a past relationship with Nuinokata, it really does lend credence to the theory that he was the one who sealed the demons into the Hall of Hell.

Biwamaru did have a blade hidden in his instrument, which I originally thought was for protection. Now though, with this evidence, maybe it was his sword and he transformed it after leaving that lifestyle behind. Like Jukai, maybe Biwamaru became disillusioned with his life as a Samurai. Or, maybe he was injured and that caused his blindness. Or he was an Asakusa spy who was once a great lord and decidedly got lost in his travels.

We will probably never know, and I am okay with that. I guess perception is everything, because I thought he was this sage wondering priest and it turns out he had no idea people were taking his words seriously. This is expressed by his shock that Dororo actually listened to his suggestion at giving serious thought about what to do with her daddy’s stolen samurai stash money. I wonder if he stuck around to see how the tale of Dororo and Hyakkimaru ends. Judging by the voice over narration, it seems like he traveled on, back to another journey of self-introspection.

Then there is Dororo, being left alone with three strange men who didn’t actually rob her – that shocked me. All jokes aside, she was a resilient little girl and I’m glad she is the spitting image of her tough mommy as she got older. It doesn’t shock me that Hyakkimaru said he had to go check on something and ended up leaving. It did shock me that he was serving face in his last appearance, but that will be a discussion for another day…

Hyakkimaru had relied on Dororo so much throughout the series to keep him in check and retain his humanity. It was only right he left to figure it out on his own, and take charge of his new life. I don’t know where he planted Mio’s seeds, but the end seemed to show them meeting on a bridge surrounded by wealth (golden rice patties).

After all, the word for rich is okane mochi [金持ち], or person with a lot of rice. I’d like to think Dororo and crew set up and made Daigo’s lands prosperous once more. The bridge seemed the same as the one Hyakkimaru could view while looking at the seeds. I don’t know if it was metaphorical that Dororo was running towards her dreams and years later ran into Hyakkimaru, or if she went off looking for him.

It may be the former, because I don’t think she would just abandon her country. Especially since Hyakkimaru knew where he left her.

I kind of wish Hyakkimaru had kept the last statue his mommy Jukai had made for him, but maybe Daigo needed it more. It was a beautiful symmetry that for sixteen years his wife prayed to a headless statue, and in his moment of defeat he is in the Hall of Hell, surrounded by demons, bleeding and sobbing pathetically while caressing Kannon’s head. Daigo was such a loser, and I am glad he realized the error of his ways.

That had he not made a pact with demons and instead had faith in his own abilities and that of his son, he could have changed the world.

I think I am going to leave this final review here. I have a lot of thoughts on this series, and although I enjoyed the first cour more than the second, I loved the series. I really enjoy historical dramas with serious themes and spiritual undertones.

So, this is not a complete goodbye for Dororo, as I have plans for this series on the website. I’m not quite ready to let it go just yet, and will be re-watching and making more posts on it for a project I am working on.

For those of you who read my reviews, thank you so very much! Thank you for taking the time to read my thoughts, and for sharing the show’s experiences with me. I feel like we have all gone on this journey together, and have come out stronger because of it ☺.

The fandom surrounding this show is equally great, and very welcoming. There are a few Twitters dedicated to fan art, and the subreddits have amazing theories and ideas. Check them out if you have time, and I’ll see you all again very soon.

How did you enjoy the season finale of Dororo? Do you think we have room for one or two OVA’s detailing the pair’s time away from one another? Who do you think deserved their fate the least, and why?

Leave your thoughts in the comment section below, I’d love to hear from you! Also be sure to follow us for more exploration of the Dororo story, themes, and characters!

See you soon for another one!