Kei sends Ayanokoji a message asking for help. Ayanokoji asks Chabashira-sensei and Horikita Manabu to come and witness the aftermath of his fight with Ryuen. 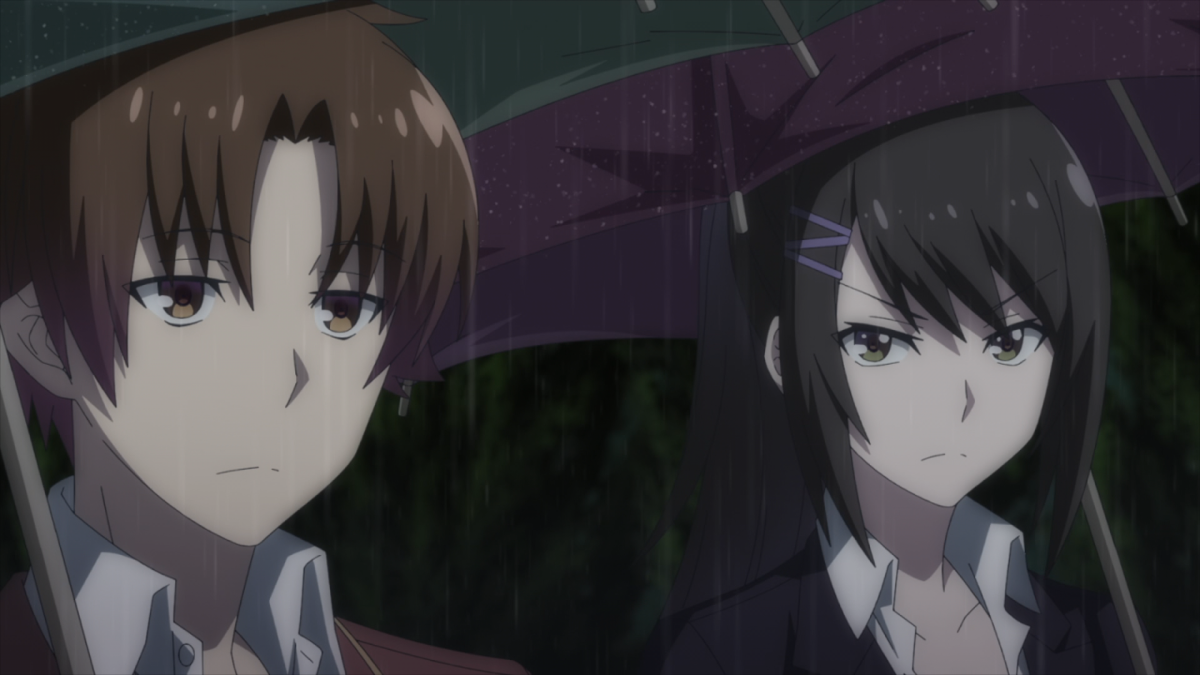 “Force Without Wisdom Falls of Its Own Weight.” – Horace

The moment we have all been waiting for: the Ayanokoji vs Ryuen fight on campus!

Although to be fair, I felt like I was watching a boss battle from one of Sega’s Yakuza video games – complete with the musical score.

Does Ayanokoji Do Martial Arts?

Ayanokoji seems to have achieved a degree of mastery in various martial arts due to his time in the white room. During his fight with Ryuen, Ayanokoji notes that while Ryuen does have experience fighting, it is solely because Dragon Boy developed his own original fighting style.

The thing that got me the most watching the two boys fight wasn’t the animation, but the fact that Ayanokoji was still holding back his strength and skills.

Ayanokoji was toying with Ryuen the entire time, and the latter didn’t even notice.

Kiyotaka on the other hand toyed with Ryuen by blocking his hits and throwing fast jabs to his knees and elbows in the Muay Thai fighting style. When speaking with Ryuen and blocking his punches, it seemed like Ayanokoji may have used a mix of Judo and jiu-jitsu to grapple Ryuen’s body and force him to the ground for the finishing blows.

Ayanokoji could have also used mixed forms of Taekwondo and kickboxing while performing a roundhouse kick to takedown Albert and Ishizaki, while using a different set of quick skills to disable Ibuki.

Despite the episode being fight-sequence heavy, we did get a few bits of story that hint toward Ayanokoji’s true goals. The first is his invitation of Chabashira-sensei and Horikita Manabu to the scene of the fight in order to “witness the aftermath”.

Inviting Manabu makes sense in the context that Ayanokoji already promised to help his little sister Suzune make it to Class A. Manabu hasn’t shown any interest in Suzune’s personal development, but maybe the race with Ayanokoji during the Sports Festival made the two boys respect one another enough to the point that Manabu would ask Ayanokoji to help Suzune join the Student Council?

Besides, Suzune called Manabu to witness the bet between her and Kushida a few episodes ago. So although Manabu is no longer Student Council President, he still has a massive influence on the student body.

When it comes to Chabashira-sensei, I think Ayanokoji was using some reverse psychology here.

Ayanokoji mentions her own selfish desire to reach Class A, and then when Chabashira-sensei reveals that teachers cannot meddle in students’ affairs, Ayanokoji says that he hasn’t asked her to. While accompanying him, her inner monologue wonders why Ayanokoji made a deal with Manabu concerning Suzune, and if Ayanokoji was going to ‘take Ryuen off the board’ in one swipe.

Why did Ayanokoji fight Ryuuen?

Ayanokoji fought Ryuuen in order to weaken his influence in Class C and to defend Kei.

At first, I took Ayanokoji’s words at face value when he admitted to sabotaging Ibuki’s espionage mission during the Island Exam (while also invertedly admitting that he allowed the chaos within to steer Class D to victory).

When Ayanokoji mentioned to Ryuen that he orchestrated the entire situation transpiring at that moment to end in violence, I also took those words at face value.

Ayanokoji wanted to fight Ryuen and break him by using the methods he loves most: violence and aggression. The fact that Ayanokoji was emotionless while beating Ryuen’s face to a pulp and calmly told him that basically, it was nothing personal – is what broke Ryuen’s ego, which in turn instilled fear in him.

Did Ayanokoji Orchestrate Kei’s Torture to Further Manipulate Her?

I was ready to accept all of that, and then when Ayanokoji begins to comfort Kei he says “this will do” before the camera begins to pull away and the episode ends.

In an almost complete mirror to season one’s ending where Ayanokoji monologued that he “never viewed (Horikita) as a friend” I now have to wonder if Ayanokoji’s real goal in allowing Kei to be tortured just before her breaking point was to build her back up again.

As if to “make her stronger” so that Ayanokoji could continue to manipulate and use her due to the traumatic ‘bonding’ situation Ayanokoji has created once more.

Pretty sick stuff, but I think I’ll leave this one here.

What do you think Ayanokoji’s true goal was by displaying power and revealing himself as the Class D mastermind?

Just how much does Ayanokoji intend to put Kei through?

Leave your thoughts in the comment section below, we’d love to hear from you! Also be sure to follow us for more Classroom of the Elite Season 2 Episode Reviews and Discussions!