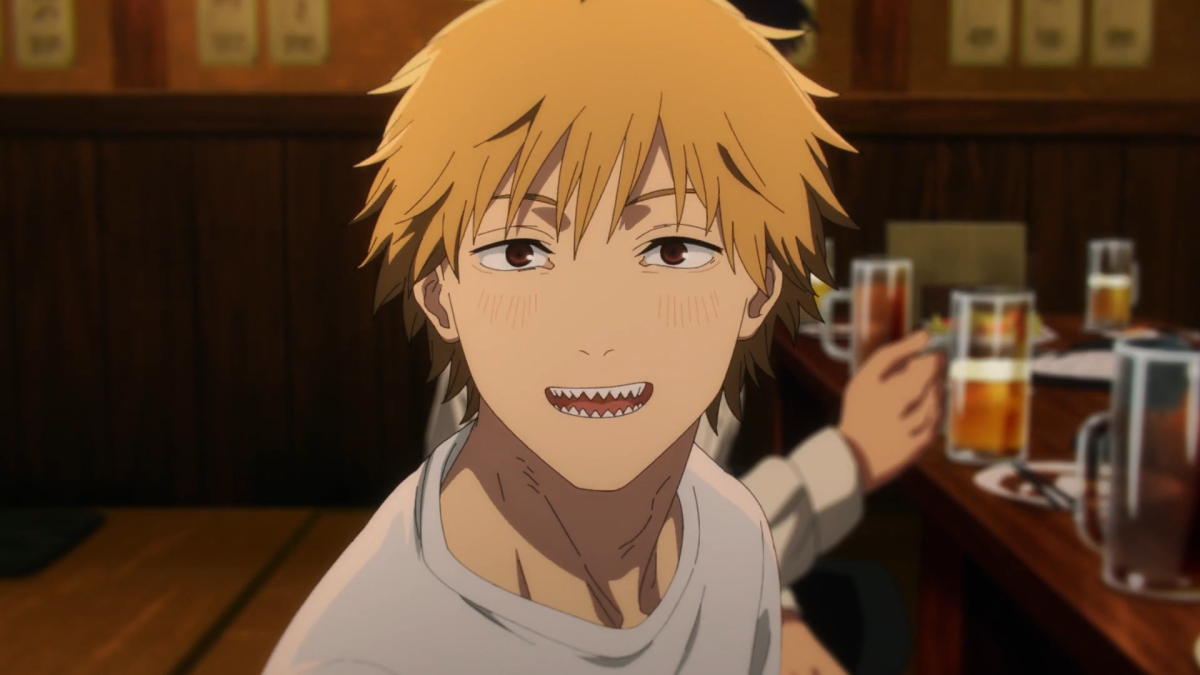 Of course, Denji’s first kiss with Himeno has to be traumatic.

I would expect nothing less from Chainsaw Man.

I am so glad I wasn’t eating breakfast while watching this scene.

To be honest, when Makima showed up I thought she would kiss Denji just to spite Himeno. I don’t know if it’s because Himeno has lost so many former partners (and body parts) but she seems to really want to hold on to Aki.

Provided, Aki is the sanest character (currently) in our story, I can see why she has such an affinity toward him.

Either way, it was nice that one of the older members of Division 4 stood with Denji in the bathroom as he puked his insides out and had a flashback of making fun of rats eating puke with Pochita as a child.

Does Himeno Sleep with Denji?

Himeno scoops Denji up from the bar before anybody notices to take him back home to her place.

I don’t know if Himeno was so drunk that she wasn’t thinking and took him, or decided to take Denji back home the moment he expressed an interest in Makima. They are both laying in bed and Himeno begins making out with Denji, and the episode ends with her asking if he wants to do it.

To be fair, this is Japan where the age of consent is 13.

While I personally view Denji as a child and would not condone a situation like that happening in my own life even if that person were the (surprisingly young) 17 years old for age of consent in my neck of the woods – for the sake of this anime’s story I am just acknowledging it for what it is.

Japan is Japan, if you catch my drift.

If Denji did sleep with Himeno, he would be accomplishing another one of the goals that he discussed with Pochita. If Denji doesn’t, that would be fine, too.

Aki already knew about the Chainsaw Devil residing inside of Denji, but it seems Himeno, Kobeni, and Arai didn’t. When one of the Division 4 old timers at the table asked Denji to announce which devil he was contracted with, Aki told him to stay quiet because that information was private.

Protocol or not, I’m kind of surprised that Aki didn’t even mention exactly why Denji was too important to kill (or sacrifice) to the Eternity Devil.

Obviously, Aki wouldn’t have said it within earshot of the Devil while stuck in his genjutsu, but they could have had some sort of conversation privately before this situation even arose.

I didn’t think Aki would be able to outdrink Makima for more information on Denji, and Himeno pointed out that Makima is usually off traveling. Thus far, she’s only remained in Tokyo simply for Denji.

Either way, this episode was a lot better than the last one. Mainly because Denji was able to defeat the Eternity Devil and Aki’s team was able to exit the infinite loop hotel.

Do you think Denji was robbed of a decent first kiss?

Is Himeno jealous of Makima?

When do you think Aki will assemble enough Gun pieces to find the Gun Devil himself?

Leave your thoughts in the comment section below, we’d love to hear from you! Also be sure to follow us for more Chainsaw Man Episode Reviews and Discussions!