This is a short review of the anime series A Place Further than the Universe. 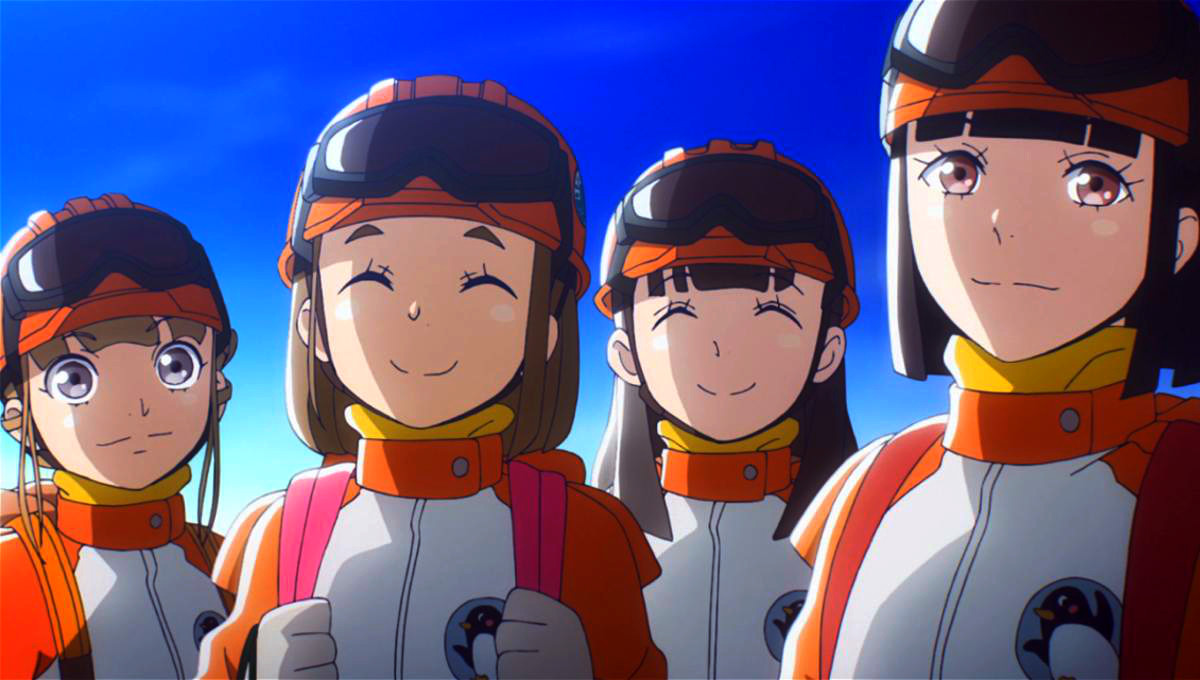 Oh, it really has been too long. Taking a break from anime for over a year makes you somewhat forget exactly why you watched in the first place. It all blends together, a huge amalgamation of jumbles in your mind.

Then you see something, cliché or cheesy as it is – and deep down you feel it. “This is why I watch” you say out loud, suddenly self-conscious sitting in your room; in the library at school; on public transit.

The Springtime of Youth is something always covered in anime. Or to live a “rose coloured life” is the goal of an apathetic high school student who you know is the main character because they have a window seat in the classroom.

That feeling when you’re young that anything is possible and that you only have a certain amount of time to achieve it before it all slips away. Before jobs, college and other things where suddenly it’s no longer acceptable to have fun. To be curious, to laugh, to do something crazy. It’s a common fear of working years towards a goal, only much later in life to realize it was all for naught. Regret, not taking the chances you wished you had because of fear.

I felt all of this with a cliché shot of two characters who do not know one another sharing the same space. One character is preoccupied with their current task, and the other character stops to look at them. This is where I got hooked.

A Place Further Than The Universe [ 宇宙よりも遠い場所], Uchuu yori mo Tooi Basho is aptly named. The episode begins with our main character, Tamaki Mari, having a dream that illustrates her fears. In the dream she is a child, playing with a boat in a basin of water.  She’s in an empty plane of what looks like an endless, colorless beach; alone and engaged in her activities. Later on in the episode she explains that she wants to live a fulfilling life, but she is utterly afraid.

Tamaki finds an old notebook of things she planned on doing once reaching high school and cries that she hasn’t completed them yet. The next day she tries to go on an unplanned adventure by ditching school and “walking opposite the usual way”, but she chickens out and goes to school. Her close friend supported her, but it just wasn’t enough.

After she chickened out, she happens to run into the girl who is about to change it all for her. The girl with the long black hair and 1 million 円. Some circumstances work out under what I’d like to think of as fate, and Tamaki is able to return the money to the mystery girl because they attend the same school. We never get the mystery girl’s name or a proper introduction, but we learn her life story.

Her reputation proceeds her.  Kobuchizawa Shirase’s mother was some sort of Arctic researcher and went missing when she was younger. Kobuchizawa saved up money working part-time jobs to go to Antarctica to find her, and even tried to start a club to find support. In most school anime we find that you need at least four club members for it to be official (Free! Iwatobi Swim Team, Hyouka, The Melancholy of Haruhi Suzumiya, Charlotte, Doki Doki Literature Club….etc.)

No one supports this girl. She is a second-year student who doesn’t seem to be interested in preparing for entrance exams, has no friends, and seems too eager about going off to the end of the known world. Everyone thinks she’s crazy. She is almost bullied into giving some of her money away, but Tamaki comes along at the right time with a distraction.

Kobuchizawa thought that the teachers really did find out she’s walking around with a million yen and got scared.

In Japan, many high schools see their students as a reflection of their reputation. Some schools even enforce the uniform dress code outside of the classroom. If a student, say does something unsavory like get into an argument with a jerk from another school – a person of authority (let’s say a restaurant manager) could step in and reprimand them by reporting it to their school.

The school would discipline the students as would the parents most likely. I’m not sure if Kobuchizawa lives alone (we haven’t heard anything about her dad yet) or with relatives, but in a Japanese societal context you can begin to understand why she is such an outcast. Her (parentless) situation could also explain why she has the freedom to do this.

This is not to say that all Japanese parents are stuffy and care about what others think, but it seems to be a dominant cultural trait to not “cause trouble” for yourself or your high school. (College I believe is much different.)

To Tamaki however, Kobuchizawa is a dream. A chance to change her life. A chance to support a fantasy that involves everything in her vague sense of adventurism. Kobuchizawa mentions that she is used to people disappointing her and letting her down, but still hands Tamaki a flyer for a boat show. It’s in Hiroshima and they live in (I’m assuming) rural Gunma prefecture.

When it’s shown that although scared, Tamaki decides to take the step forward and runs into Kobuchizawa while she’s entering a train car to look for a seat…her smile was everything. I literally felt like jumping up and cheering. They tried taking pictures of Mount Fuji and ate onigiri on the ride to Hiroshima. I’ve heard that bento are best on long train rides (they couldn’t afford the expensive ones on board), and that you should buy one before boarding.

Many bigger stations in Japan also have vending machines and sometimes small food stalls where you can purchase sustenance before your ride. I imagine that when I finally do get to Japan, I’d like to do as they did. I’d buy my bento beforehand however, with a drink from a vending machine and I’d ask a conductor which side fuji-san would appear on our ride.

The episode ends with the two girls in Hiroshima, looking at the Shirase. I wonder if Kobuchizawa was named after the ship, or vice versa. Either way, I will continue watching this show and give a review of my final thoughts in a post at a later date. It seems that the girl working in the konbini, Miyake, will join the group next episode. There was a No Game No Life poster in the store and it seems Ishizuka Atsuko directed that show as well as this one.

I feel very hopeful and inspired after watching this episode, so I wanted to share my first impressions. Too many times in my life I’ve gotten scared to try something new and later came to regret it. Or I tried something and it didn’t work out because I didn’t try hard enough.

I once had a YouTube channel I loved that didn’t work out. For a very long time I thought I just wasn’t good at it, and I stopped making videos about things I loved. Now I started this blog, and sometimes I doubt myself but I want to make this work and create a fun place where people can talk about their passions and build a community.

It’s going to be a lot of work, but sometimes even the smallest things can keep you going. Small things like A Place Further Than The Universe.

Have you seen this anime yet? Did you watch No Game No Life? One more question – If you could visit anywhere in the world, where would you go and why?

Tell us about it in the comments, I’d love to hear from you! Also be sure to share the article & follow us for more inspiring anime!

Processing…
Success! You're on the list.
Whoops! There was an error and we couldn't process your subscription. Please reload the page and try again.